Posted on September 4, 2011 by conorfarren

I just spent a part of my holidays reading Keith Richard’s autobiography, Life. In 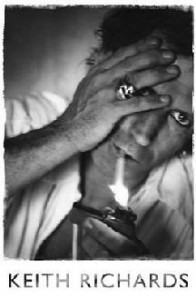 it he details his rise in the 1960′s as guitarist in the Rolling Stones. He charts his musical interests, his part in the band’s success, his marriages and relationships, and his relationship with Mick Jagger. He also details in pretty intense detail his “struggles” with multiple addictions over 40 years. He describes multiple drunken episodes, his dependence on heroin for many years, and how his addictions affected those around him, his girlfriends, and his children. It makes for pretty harrowing reading, were it not for one thing: he dosent express any regret for any of the damage he has done. Bizzare episodes where he abandones his eldest child to live with his drug addicted partner, his previosuly estranged father and a slighlty mad alcoholic minder are described and then passed over. His friendships with many musicians appear fuelled by drugs and alcohol, and then their deaths listed as if part of some terrorist campaign between them and reality. He seems impervious to the feelings of others, including Mick Jagger, and accepts without remorse all the efforts to help him achieve sobriety. He credits himself a survivor because he knows how not to go too far in his addiction, he was always moderate. He uses the words of recovery, without acknowledging the emotion nor the effort that must be behind those words. In short, he refuses to acknowledge the emotional responsibility for the effects of his addiction upon those around him, and he seems to feel that putting words upon paper absolves him from his evil deeds. It is uncertain if he is currently sober, but there is no doube that he is not in recovery. It seems such a shame that such a talented and indeed really dedicated musician can do such damage to those around him, and not see that for himself. No only does he not see that, he dosen’t evey try to see it. He makes the excuse that this is the territory that goes with being a member of the Rolling Stones, as if that is a justification. He is to be credited with a kind of superficial honesty that hides more than it reveals. As with a lot of addiction, the people close to him suffer most, and he simply refuses to see that. I hope that he will write a second book, “New Life” in which he charts his revised understanding of his addicted life. I somehow doubt it.

This entry was posted in Uncategorized. Bookmark the permalink.